After a LOT more time than I originally imagined, the trailer is done. I cut out plywood for the side steps, crash pads and half-moons near the wheel wells. I then coated the plywood with urethane (two coats) and got out the staple gun. You may recall that roughly a year ago I got an air compressor. My friend Darren found a great deal on a very nice compressor and this was the first time I have really used it. I got a staple-gun and it worked wonderfully.

Putting on the carpet was easy, but took a while. Going around corners involved a lot of folding and cutting. I was pleased with the end results. Next time I might buy better quality carpet, but this stuff worked. Once the carpet was on I put the steps, crash pads and half-moon pieces on the trailer.

The next step was installing the bunk rails. This is what the boat actually rests upon. They are two long pieces of wood (about 14 feet) and are roughly a little like a narrow 2 by 4 with one edge beveled. The wood is obviously not bent, like the trailer is, so it took some encouragement to get the wood back to the desired shape. You’ll see in the photos that I had to get a strap with a ratcheting mechanism to pull the wood into shape. One I had it bent and the holes in the wood aligned with the holes in the trailer I bolted it down.

After the rails were installed I put on two layers of carpet. The first layer is the same black cheap carpet that is on the rest of the trailer. The second layer is much better quality and is made to be used as bunk-rail carpet. It is the thick gray carpet in the photos. This was another step where my staple gun came in very handy. I like that thing a lot. More careful folding and cutting involved in this step. In fact, all of this took a lot of trimming. If you do anything like this invest in a very good pair of scissors. Trust me, you’ll thank me later.

Finally, last evening I put on the decals and now the trailer is starting to look complete. Susie was a huge help with the decals. They are very difficult to peel off their backing when your fingernails are trimmed guy-short, but she was able to do it easily. She has been a great help on this project at key points along the way.

Pin striping and the trailer jack are all that remains. 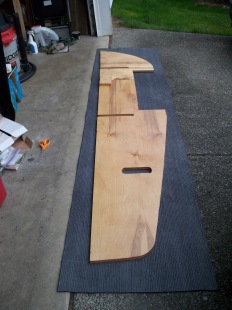 Laying out the carpet 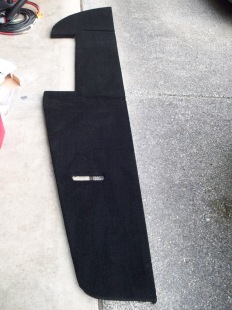 Side steps, half-moons and crash pads all carpeted 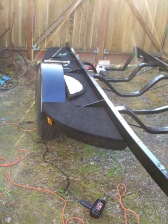 Side steps and half-moons installed!

I did one side at a time 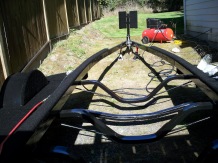 Trailer decal – note it is blue 🙂

A final photo of the completed project!

7 thoughts on “The trailer is (almost) done”

A WordPress blog about boat

The lines have fallen for me in pleasant places. Indeed, I have a beautiful inheritance - Psalm 16

Ski Tur Valley
sarah in real life
Around the Hill

Photos, and maybe a geeky blog post or two!